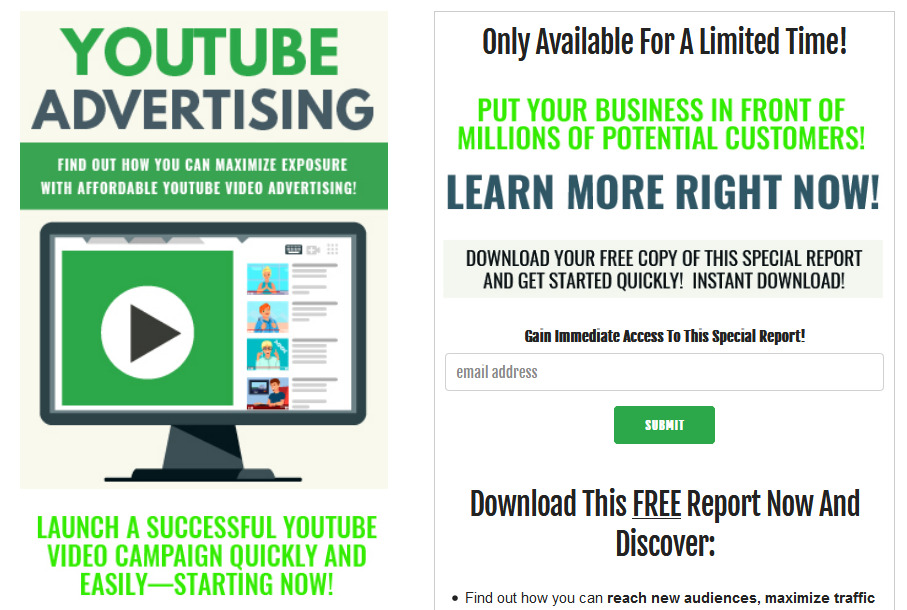 Before you begin advertising on the YouTube platform, it’s important that you understand the different options available.

Currently, there are seven different types of YouTube ads:

TrueView Instream Ads: These are the most common of all YouTube ads, the main advertising format.

8 out of 10 viewers prefer this sort of ad over the other types. This is mostly because this format gives you the most control over which advertisements they see.

You may see this as a negative, as viewers can choose to skip your ads, but think of it this way: you’re paying only for those viewers who are interested in what you’re offering them.

These ads can be as short as 12 seconds and as long as 6 minutes. A six-minute ad is a fairly long one, so you should probably aim for somewhere in the middle.

There are two basic types of TrueView Ads: skippable and non-skippable.

Let’s look at those in more detail.

Non-skippable Instream Ads: These are a type of TrueView ad that do exactly what the title says. The viewer cannot skip over these ads, but must watch all the way through to get to the content they’re searching for.

Non-skippable ads can play at the beginning or end of the chosen video, or can be placed somewhere in the middle. Ads that pop up in the middle of a video can be annoying, but you’re more likely to keep the viewer’s attention because they’re waiting for the rest of the chosen content to display.

The important thing to remember is that the ad must be watched all the way through, which means you pay every time the ad plays. This would be a good choice for a business with a large marketing budget because you’re not going to be targeting your viewers quite as narrowly as you would with a skippable ad. With a non-skippable ad, you’ll pay every time it pops up.

Note: YouTube recently announced that they had to be under 20 seconds long (rather than the 30 seconds they previously allowed).

Skippable Instream Ads: Again, this is just what it sounds like. After viewing five seconds of your TrueView ad, the user can opt to skip it and get straight back to their chosen content.

You aren’t charged unless they watch at least 30 seconds of your ad (or if they take action such as clicking on a link in your ad).

Skippable ads can be played at the beginning of a video, during the video, or afterwards. We recommend placing your ads at the beginning or middle of the video because it’s way too easy to just skip an ad at the end by clicking on the next video in the series.

Sponsored Card Ads: These ads display content relevant to the YouTube video being watched, such as products used in the video itself. Viewers will see a teaser for the card for a few seconds, or they can click an icon at the top right corner of their screen to browse through the cards associated with their video.

These ads are available on both desktop and mobile versions of YouTube. Sponsored cards are a very unobtrusive YouTube ad.

Overlay Ads: These are available for desktop or laptop computers. An overlay ad is a transparent ad that appears in the lower 20% of the video. That’s 480 x 70 pixels and viewers can exit the ad at any time they wish.

Overlay ads are not as popular because are prone to with false clicks, and because some viewers find them annoying.

Display Ads: These appear to the right of the video just above the video suggestion list. They can be 300 x 250 or 300 x 60 pixels in size and can run across all areas of YouTube except for the homepage.

If a viewer is interested in what you’re advertising and sees one of your display ads, you should get a click.

Midroll Ads: These ads play full screen and appear in videos that are more than 15 minutes long. They play just like television commercials, interrupting the video periodically to show an advertisement.

Viewers must watch the ad before the video continues playing so you’ll be paying whenever the ad runs and not when the viewer watches a certain amount of the ad.

These ads can appear on desktop, laptop, and mobile devices. Advertisers can insert ad breaks at natural pauses in a longer video for a more streamlined viewing experience.

Most people are used to seeing commercials when watching a video, so this type of ad isn’t as annoying as some of the other types. Since these are non-skippable, you are charged on a CPM basis – that’s Cost-Per-Mille, where “mille” stands for a thousand views.