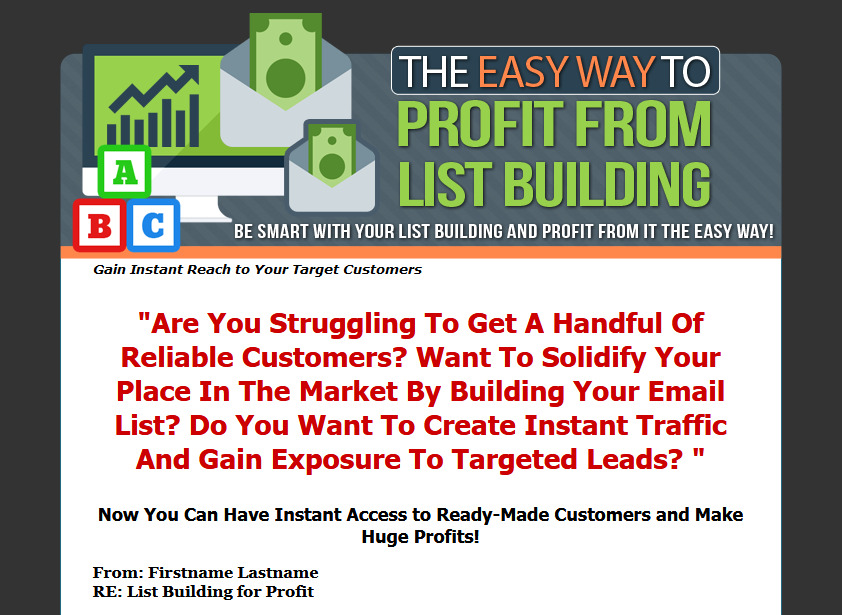 The next list building tactic I want to talk about is solo ads.

This may change down the road, but as of right now, this year, solo ads are cheap, they’re effective and very easy because you don’t have to worry about landing page quality score or paying per click and keeping an eye on your ads ad paying by the click.

So they’re transferring their authority over to you, in a way, that’s what makes it the most effective way of generating traffic right now, in my opinion.

Because the ads are still cheap, it’s very effective for anybody who has the money to risk on it.

One place you can find a lot of great solo ad deals is by getting on Skype and talking to different solo ad sellers.

You can find solo ads at one place called soloaddirectory.com.

That’s where I would go if I were going to go and look for solo ads right now.

The key to have profitable solo ads is your sales funnel.

You want to have the squeeze page that generates the free leads that gives away something.

Then you have an upsell from there, which will be a one–time offer for something that’s below the $17 price point and then you want to have upsells from there so you can afford to pay for your solo ads.

Now you may also want to promote things on the download page for your freebies that you’re giving away.

That way you can come close to breaking even or you can profit directly right away from that solo ad before you even get the subscribers on your list.

Although many solo ads I haven’t profited from right up front, I made a profit on the backend from promoting strictly to the subscriber list.

That’s something you have to think about.

A lot of companies in advertising are willing to pay a lot of money upfront and even lose money on the front end because they know they’re going to make money on the backend with their follow up marketing, which is what email marketing is all about.

So let’s move on to ad swaps.

Ad swaps are where you send out an ad to your list promoting someone else’s squeeze page and then someone else does the same for you to their list.

So it’s similar to solo ads except for no one is buying anything; you’re just trading off ads.

The place where everybody has moved to these days is called safe–swaps.com.

There used to be a site called IMadswaps.com, which was like an ad swap forums.

There are other forums that kind of emerged in the last few years and they’ve pretty much slowed down because of safe–swaps.com.

The thing about ad swaps is that it is getting less effective because seeing that it emerged around 2009, that’s when everyone was discovering ad swaps and starting to do it.

Now people are over–mailing their lists with ad swaps.

So if you’ve got a good sales funnel, you can use it for your ad swaps.

Also, ad swaps are a great way to test your sales funnel before you start buying something like solo ads.

You’re probably going to get less quality leads from ad swaps than you are solo ads, yet it’s still a good indication of whether your sales funnel will convert traffic into sales, and that’s what’s necessary to profit with ad swaps, because you’re not promoting anything that’s going to be making money directly to your list; you’re promoting someone else’s squeeze page, so you’re relying on the traffic coming from the JV partner’s list to your sales funnel.

You don’t want to overcomplicate marketing.

This kind of thinking is really profitable if you could get super focused.

Think about how simple this business is right here.

You put together a sales funnel.

You do ad swaps every day.

You test your sales funnel every day until you’re converting the maximum amount of visitors who land on your page.

That in itself is a business no matter what anyone says.

So that’s what I try to do in my business… SIMPLIFY.

I have a daily routine that I try to simplify down more and more every day until that is just brain dead stupid, and lately, it has been solo ads because I’ve found that I’m getting the best returns on solo ads.

But if I didn’t have any money, I would start off with JV giveaways just to generate 100 subscribers or so, then I would move to safe–swaps.com and I would start ad swapping.

That’s what I would do if I didn’t have any money.

There’s also another thing I would want to do if I didn’t have any money and I had a small list.

This goes out to the small list owners, people who are just starting their lists and what not.

If you have a list of 100 people or 1,000 people, you could start doing what’s called click banking.

It has nothing to do with ClickBank.com but what it is, is you go to a marketer with a huge list and you say, “I will send you 100 clicks or 1,000 clicks over the course of this month (clicks mean visitors) and what you will do is return those clicks all at once after I’m done.”

So what happens is the big marketer with a big list will give you a tracking link to use on all your emails.

You’ll work hard to build up your traffic to them through that link, and then when you’re ready to cash in your clicks you go to them and say, “I’d like to cash in my clicks,” and then they send you clicks; they send you as many as you have sent them.

This is real similar to ad swaps, as you can see, but it works out well for small list owners because you can just focus on sending traffic to one big marketer without having to set up all kinds of ad swap deals.