Use Social Networks To Build A List MRR Ebook 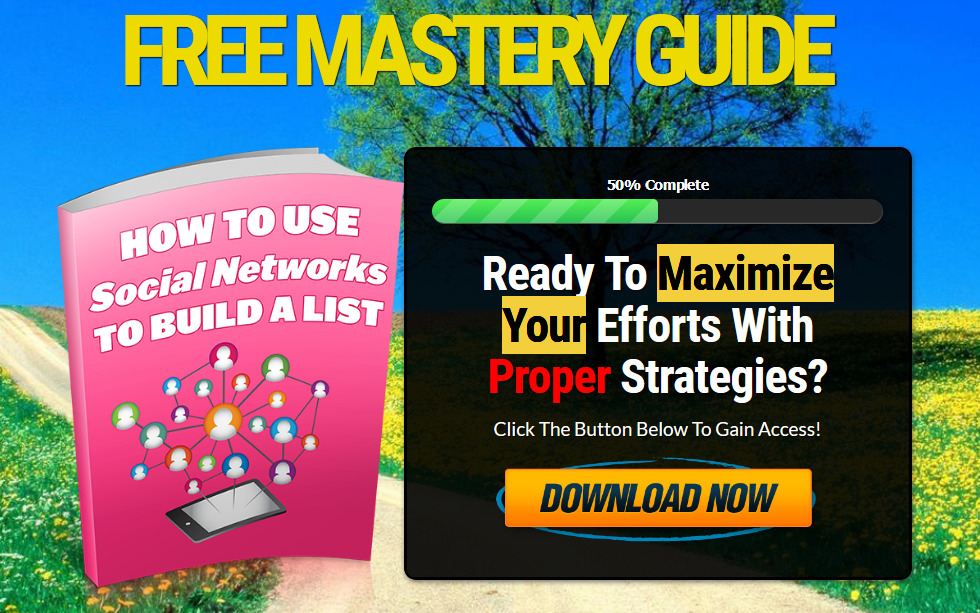 You don’t just want to build a large list of people who have nothing to do with your market niche; you want to have a list of people whose interests mean that they might want to buy your products and services later on. Social networks are excellent mediums for creating targeted lists because it’s easy to see what people’s interests are via their searchable profiles, and they can see yours too!

USING YOUR PROFILE TO ATTRACT THE RIGHT DEMOGRAPHIC

The first step to getting a targeted list together is to clearly project the right image and interests in your own profile. To do that, you want to fill out the profile as completely as possible. You also want to use your real name, as this profile should be as authentic as possible. For Facebook, for instance, you would want to add as many details of books or movies relevant to your market niche to attract the right demographic. In Twitter, you would want to give as many keywords that are relevant to the niche you are marketing as possible in the 140-character description of your profile. In LinkedIn, you would also want to give a good, accurate description of your interests and accomplishments as they relate to the market niche that you are marketing to.

FINDING OTHERS WHO HAVE SIMILAR INTERESTS

Once you’ve got your own profile filled out, you can start searching via the keywords you’ve used to find others who are in your market niche and invite them to follow or befriend you back. In Facebook, they track everyone with similar interests, so all you have to do is to click on the link in any of the categories in your Info tab, and you’ll get a listing of people who have similar interests.

Facebook and LinkedIn also have groups that you can join that can lead you to people with similar interests. You can even create your own group if that’s something you want to do. By networking with people who are in the same group as you are, you will be able to build your list fairly quickly. People like to network with people of similar interests, and this works well when you are trying to market to a specific niche.

The Bigger, The Better

You will want to build as big a list as possible within each network. The reason for this is that the bigger your list, the more possibilities to market to later on. Also, a big list has a magnetic effect on other people who will join just to find out what all of the fuss is about. It is easier to build a big list on Twitter than on any other social networking site, but it’s possible to do it on all of the social networking sites. Here, we’ll discuss a few ways to get a jumpstart on building a big list quickly and easily.

You jumpstart every social network list by befriending or following people you know, whether they’re in your niche or not. This way, you aren’t the person with only a few people on your list. That’s never attractive. Start with people who you already know who are online. They can be work colleagues, neighbors, friends, and family. As long as you can get them to befriend or follow you back, you have the basis of a good start. Once you have a few of those, you will start to target people better so that your list can be used for marketing purposes later.

SEARCH FOR PEOPLE TO BEFRIEND

To build your list quickly, you should expect to add a couple of hundred followers a day on Twitter and 20 or so on Facebook. You will find these people by searching for your similar interests, as stated in the previous section. Facebook is much more stringent with the number of mass befriendings you can do before they peg you as a spammer and throw you out, so be careful. With LinkedIn, you should also seek to add numerous contacts each day. They won’t immediately befriend or follow you back, but eventually, about 30% will do so out of pure courtesy. That’s a quick way to build a list.

Here’s a quick and easy trick to get a targeted list almost instantly: Befriend your friend’s friends on Facebook. You can go to any friend who is within your market niche and look into his/her friends list if he/she hasn’t made it private. From there, you can befriend those friends and see if they return the favor. You can also do this on Twitter by following someone within your market niche who has many followers and just going down the list of their followers and befriending them too. As suggested earlier, this method will get you about 30% to follow back. If you follow 200 people on Twitter and 60 follow you back each day, within a month, you can expect about 1800 people to be on your list! That’s a real accomplishment and can really zoom your business to heightened levels of exposure!

The funny thing about befriending or following someone is that not everyone befriends or follows you back. Some people will even befriend or follow you and then later choose to unfriend or unfollow you. Other times, they simply don’t befriend you to start with. Of either of these situations, you have to keep track of both so that it doesn’t affect how large you can grow your list. There are some limits placed on list building within networks, and when you bump into them, you may wonder why you can’t follow any more people after reaching a certain level. The key is to trim your list frequently.

This is not an issue on Facebook, since you won’t even see a person’s profile unless they befriend you too. You can send out invitations, but if they don’t befriend you, it doesn’t affect your ability to send out another invitation to befriend someone. It’s not very common to unfriend someone on Facebook, although it does happen, but that doesn’t affect you much because all it means is that you can’t see his/her profile anymore and he/she won’t see your status updates, as if the connection never happened. In that respect, Facebook assumes that if either party decides to unfriend the other, then the connection is not even a one-way; it’s non-existent. It means that the two of you haven’t connected at all. On Twitter, it’s much different, and you have to keep track of the people you are following and who is not following you back.

In Twitter, you can be happily following people, 200 a day, and within 10 days, hit 2000 people. Right about that time, you find that you can no longer follow anyone else. What happened? This is a safeguard put in place by Twitter to keep robots from coming in and doing exactly what you’re doing for the sake of building large lists. It’s a spam protection device. The key to getting around this little safeguard is to make sure that people who aren’t following you back are trimmed from your list after a few days. So, if you invite 200 and only 60 follow back, be sure to unfollow the others. That’s because you will be approaching 2000 followings too quickly, with insufficient followers who reply back. In Twitter, if you follow 20% more people that follow you back while approaching 2000 people who you follow, the entire system grinds to a halt. What a drag, right? Just unfollow the people who aren’t following you back, and you’ll be able to breeze right through that impenetrable barrier. Keep the number of people you follow either much lower or nearly equal to the people who follow you back.