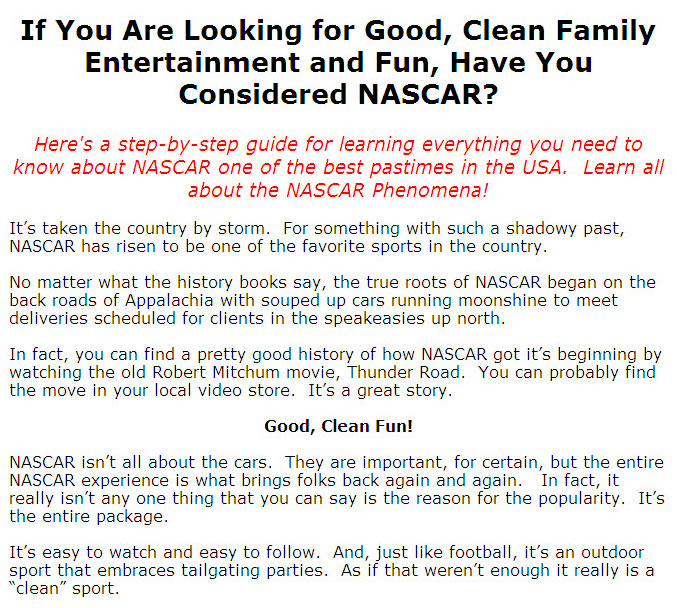 History of NASCAR
Finding the Events
Deciding What Event to Attend
Grab Those Tickets
Planning Your Trip
What Should You Bring?
Accommodations
NASCAR Collectibles
Have a NASCAR Party
Start Your Own Fan Club
Why NASCAR?
All About the Cars
Qualifying as a Driver
Stars of NASCAR
Memorable Moments

NASCAR was formally structured February 21, 1948 by a person named Bill France, Sr. when he visited Daytona Beach to escape the Great Depression. But stock car driving had been happening in Daytona Beach during the 1920s and 1930s. The location was competing against Belgium and France to become the preferred location for setting records in land speed. It was between the years 1927 and 1935 when eight consecutive world records were set in Daytona Beach that established its name as the most suitable place for setting speed records on land. However, Daytona Beach became a city of racing interest when a momentous racing event between Ransom Olds and Alexander Winton occurred during 1903. Starting from that year, enthusiasts have been visiting Daytona Beach and began setting their records resulting in fifteen records between 1905 and 1935; this gave way for the Daytona Beach road course. In 1936, the premier location for the quest of land speed records was transferred to Bonneville Salt Flats in Utah but Daytona Beach has already established its reputation for being synonymous with fast cars.

NASCAR would not have been possible if not for several significant people starting with mechanic Bill France, Sr. During the Great Depression, Bill France, Sr. moved to Daytona Beach, Florida from Washington, DC. Even before he moved to Daytona Beach, he was familiar with the history of the land and, of course, the speed record attempts that happened. It was in 1936 that France entered the Daytona event in which he finished fifth but he took over the course in 1938 and before the start of World War II, he even promoted a few races. Several drivers, including France, where frequently mistreated by corrupt promoters who would leave events taking all the money with them without even paying the drivers. This maltreatment made France decide that racing would not develop without a formal authorizing committee, uniform rules, regular schedules and organized events and championships. France began to talk with other influential racers and promoters in December 1947 at the Ebony Bar at the Streamline Hotel in Daytona Beach, Florida. This gathering gave way for the formation of NASCAR on February 21, 1948.