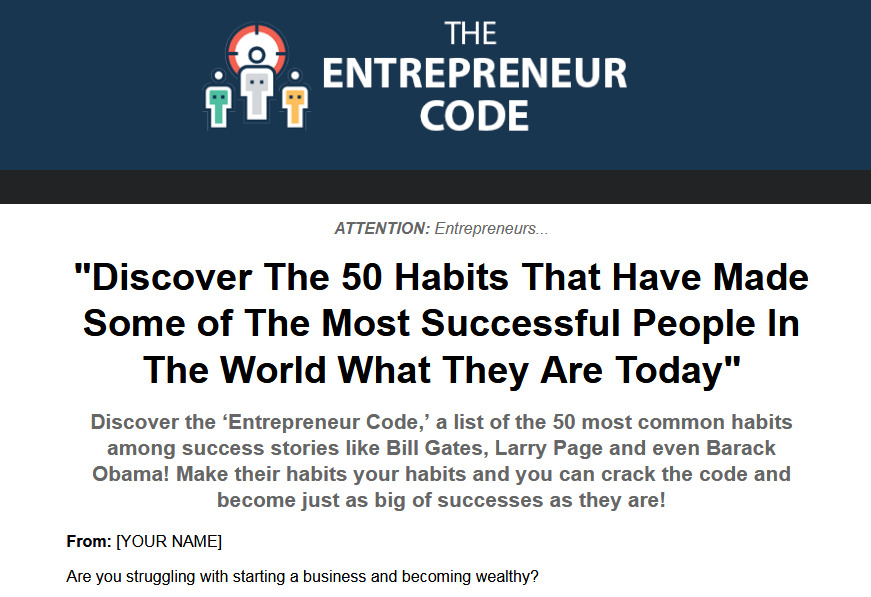 Habit 1: They get up early

You’ll notice that among successful people, one of the key factors that they all share is the propensity to get up early. There are a lot of advantages to getting up early. There have been dozens of studies that have linked getting up earlier with getting more accomplished. Even if you aren’t a morning person – like Barack Obama – you still should consider getting up a couple of hours earlier. You might find that you have time to get more done and will get even closer to your goals.

Habit 2: They work out consistently

Another thing that successful people share is consistency. This usually extends to all areas of their lives, but it is especially true in the case of exercise. As a rule, successful people tend to exercise several times a week. They are not only very committed to it, they make it part of their schedule and work around the workout. Doing this has a couple of benefits. Besides the obvious health and fitness bonuses that you get from working out, when the first thing you do is exercise in the morning, you release those endorphins and it makes you more productive the rest of the day.

Another thing that successful people do. You probably know that if you eat too much, or if you eat the wrong kinds of food, you end up feeling bloated and horrible, making it difficult to do anything.

This is one of the reasons that successful people eat right, but it’s not the only one. They also eat right because there are certain foods that are really good for brain power and energy.

Habit 4: They equate fitness with success

Successful people don’t think about fitness as a chore or something that they need to do to impress anyone else. They equate fitness with being successful. There is no doubt that the two are related and that’s why they make this a priority, getting up early in the morning to work out, or making fitness one of the things that they work on no matter what else is going on.

Habit 5: They get rid of bad habits

In addition, you will notice that successful people are able to kick most of the bad habits that are out there. Whether that is drinking, drugs, overeating, cigarettes or any other vice that plague humanity, successful people tend to overcome those challenges and they are that much more able to channel their energies into something that is productive and useful.

Habit 6: They get professional help

Successful people also know that everyone needs help once in a while, and they get their help from professionals. Whether that professional is a doctor or dietician, or simply a personal trainer to help them at the gym, successful people use the talent around them to improve their own lives.

In this chapter, we’ll be profiling Larry Page, one of the founders of Google. While you may not be as familiar with his name as Mark Zuckerberg or Steve Jobs, Page is one of the most successful entrepreneurs in the world, surpassing some of those names that you are familiar with through his impact on the present state of technology and potential impact on the future.

Here’s a pop quiz. What is the one way to ensure that your products and services are always at the very top of internet searches no matter what? The answer is – build the world’s most popular search engine first, and then build products and services second. Page read the biography of Nikola Tesla when he was just 12 years old and it changed his life – and ours – forever.

From that point forward, Larry Page had a passion for business and technology, and he turned it into the world’s most successful corporation. Most of the advances in artificial intelligence, robotics, automotive technology and the internet at large will likely come from Google in the coming decades. Let’s take a look at the nine habits that people like Larry Page incorporate into their life in the area of setting and achieving professional goals.

Habit 7: They write down their goals

The problem with trying to take a journey somewhere that you haven’t been before is that without a map, you have very little chance of reaching your destination. Imagine that you took a trip from Los Angeles to Tallahassee without a GPS or a map – and there weren’t any road signs to guide you. That’s how trying to reach your goals without writing them down is. Luckily, successful people like the entrepreneurs featured here know this, and they make sure they always write down their goals.

Habit 8: They work on them nearly every day

Also, entrepreneurs don’t just set them and forget them. They actively work on them every day if they can. The success that they achieve comes with a lot of hard work and they know this is the case. That’s why they consistently do thing to get them closer to their goals. If you want to be successful, then write down your goals and post them somewhere that you can always see them. Then each and every day, try to do something to move yourself closer to each and every one of those goals.

Entrepreneurs aren’t afraid to dream big. Someone else might think that owning a multi-million dollar company or becoming a billionaire is well out of their reach, but the most successful people in the world have no problem seeing themselves achieving any level of success that they desire. They know that anything worth achieving is going to take hard work, but that doesn’t mean that it’s impossible. It just means that it might take a little longer to get there, or it might take more work for them than someone with less lofty goals.

Habit 10: They don’t allow setbacks to keep them down for long

Even when things happen that make it more difficult to reach their goals, they don’t get thwarted for long. Successful entrepreneurs know that failing is part of the journey and when they have a setback they just think of a way around it and then continue on their journey. Setbacks can knock some people down and they never get back up, but that’s not the case with the world’s most successful people.

Habit 11: They never give up on their dream

Another thing that can sometimes happen when a journey is difficult is wanting to give up on the dream. For millions of people who do not realize that they really could reach their goals if they put in the work, the dream is just that. But for these entrepreneurs, they never give up, no matter how hard things get. They just keep plugging away until they eventually achieve their goals.

Habit 12: They do things that others won’t

You will also notice that successful people will do things that others won’t do. For example, if someone has a dream of creating a video game, they may not be willing to spend ten years reading every book on programming and living on almost nothing while they work towards that dream. Most people don’t have that kind of motivation. But successful entrepreneurs will stay late, show up early, and work for years without pay to achieve their goals.