Irresistible You MRR Ebook With Audio 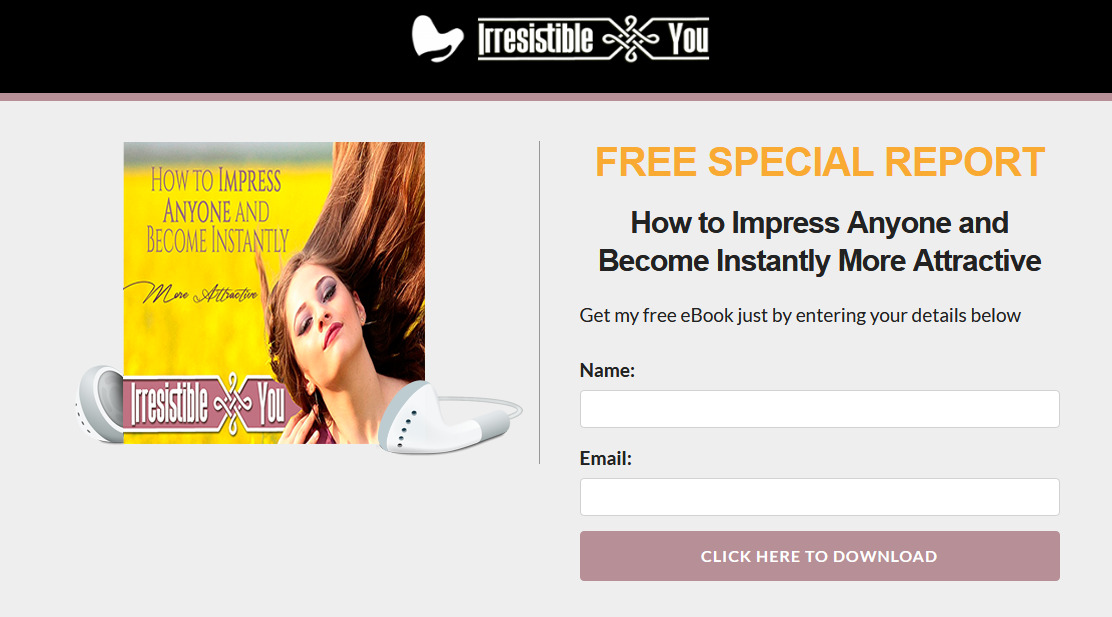 I mentioned that there are people out there to whom this comes naturally. Perhaps you know someone. I personally have a friend who I’ve known since university and who was just as goofy as me during those years. That’s to say that he spent a whole ton of evenings watching YouTube, wasn’t particularly ‘cool’ in the traditional sense and wasn’t exactly thriving on his course. Suffice to say, he was just a regular guy.

But despite not being anywhere near the top of his class, he got the placement job that everyone on his course wanted. This was simply due to how well he interviewed. When he left Uni, he went to work with Simon Cowell but shortly after decided he wasn’t interested in that career anymore. So he chose a completely different path and in months he had changed career and is now on a six figure salary. He took a year long sabbatical recently and his work were happy to pay him while he was away. He’s always being given development opportunities, women love him and he recently got offered a spot on a massive YouTube channel.

So why does all this great stuff happen to him? Simple: he’s highly charismatic and charming and attractive in the magnetic sense. He just has that X factor and this means that people want to work with him, despite the fact that if you knew him at uni, you’d know he was actually just a regular guy.

Well, it actually comes down to our evolutionary history. Our evolution dictated the development of our hormones and emotions which in turn serve one basic directive: ensure our survival and ensure the survival of our offspring. That’s why we’re driven to find food, it’s why we look for mates that seem to offer good genetic material and it’s why we like people who have resources.

Something very similar plays out when it comes to deciding who you want to associate with. Often, we choose people to associate with because we think they can help us to survive. Someone very confident will appear to have a higher social status (even if that is not true) and so spending time with them might help us to elevate our own social status. Someone who seems to know what they’re doing might be able to help us with access to foods or potential mates.

This is a big part of why we gravitate toward some people and not others: they are sending a signal that they are highly capable and that they are a good genetic ‘pick’.

The Game For Life

This is a concept that pickup artists realized some time ago. They realized that women don’t like men who dote on them or who pay them compliments all day because they don’t offer any challenge. If you’re infatuated friend who has been friendzoned and you spend a lot of time comforting her and telling her she’s beautiful, then guess what: you’re going to look needy and desperate. And unconsciously this says to her that you think she is out of your league. And if she’s out of your league, then what would you have to offer or her or her DNA?

Meanwhile, the ‘jerks’ are more aloof and indifferent which makes them appeal more desirable. It’s the simple logic that you want what you can’t have but with some added evolutionary incentive.

So pickup artists used this ‘negging’ technique among others in order to subtly undermine a woman’s confidence and thereby make themselves look like a catch. Another technique is peacocking where they will wear something stupid to a bar that’s loud and colorful and the hope is that women will think he must be very confident or very successful… otherwise how would he be so bald as to wear something so stupid?

But yes, these techniques are indeed cynical and they are indeed goofy. And the good news is that you don’t have to be an ass to get the girl.

Likewise the idea that girls need to turn themselves into Barbies to be attractive is similarly mistaken. As is the idea that you need to be cutthroat in order to get ahead in business…

All these ‘nice guys’ that are blaming their niceness on not having a girl are likely missing the point that they could be nice and fun and confident. It is likely not their niceness at all that is the problem!

Likewise, Derren Brown believes that in order to make friends and influence people, the single most important thing you should do is just be a nice person. Do nice things, speak to people and they will want to spend time with you! There’s no secret trick to it.

But that niceness needs to be backed up with confidence.

To demonstrate how this might work let’s look at what would be a much more successful pickup strategy for making yourself more attractive and magnetic. Note that a similar technique can work just as well for women and that we’re going to see how this applies to business as well in a moment.

So instead of peacocking and negging, instead, head to a bar and just smile at someone you like the looks of. This is already a smart strategy as if that person is at all interested, they will normally smile back. If they look away, you know to look elsewhere.

If that person then smiles at you and seems to be interested, you head over but you don’t corner them as normal. Instead, you chat to them and ask their name and then introduce yourself to the rest of the group. This instantly sets you apart as highly social, very nice and very confident. You’ve demonstrated the ability to get on with her friends and that you are a hit with them.

You can still be teasing and edgy if that’s your thing but the key is just to be good fun and to speak to everyone – not just the person you originally went over to see.

This makes you seem thoughtful and considerate and suddenly you don’t seem motivated by just one thing. Furthermore, it will also now cause that first person to question whether you’re really interested in them or in their friends. And this can bring out a competitive spirit between them. Having fun with everyone makes you seem in demand and from a social standpoint and an evolutionary standpoint that makes you highly more attractive.

From here though, when the time is ready you can ask the person you’re interested in if they’d like a drink. If they say yes, you can ask them to the bar with you and make your move from there. Try this one, it is highly effective.

So you’re still being nice, you’re just being highly confident and likeable with it. You have all the coolness of the jerks but you’re someone who can get on with their friends and be introduced to the parents – that’s really what women are looking for.

The same goes for women: you don’t have to be the nerdy librarian or the Barbie doll. If you exhibit brains and sweetness but you also know how to dress and you’re not afraid to be a bit flirtatious, then any guy would prefer that combination. The clothes here are not just about showing off your best assets but also about showing off your confidence – your willingness to put yourself out there.