Hybrid Know How – Your Guide To Hybrid Vehicles Plr Ebook 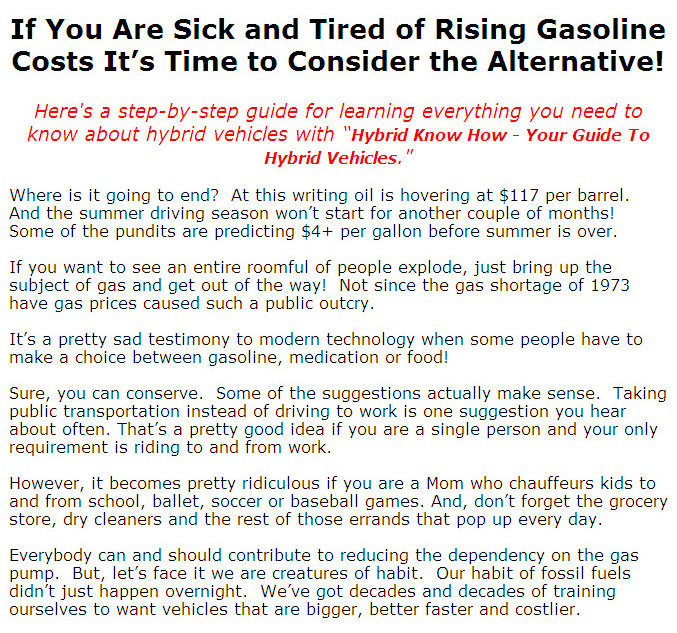 People may be surprised to know that the idea of electric and hybrid vehicles have been present even before the gasoline engine was invented. A lot of people with their brilliant ideas revolutionized modern transportation as it is today. With the rise of health-threatening pollutants, new age electric and hybrid vehicles are truly becoming a reality.

When Electric Cars Ruled the World

Robert Anderson from Scotland created the first electric carriage during the 1830s. Professor Stratingh of Groningen from Holland designed a simple electric car. Christopher Becker was Stratingh’s assistant who built the model in 1835. In 1842, Thomas Davenport from the United States and Robert Davidson from Scotland built more advanced electric vehicles with the use of non-rechargeable electric cells. Gaston Plante from France improved the storage battery and created a better model in 1865. Sixteen years later, Camille Faure continued to improve the storage battery.

During the late 1800s, several European nations like Great Britain and France began the spread of electric vehicles while constantly innovating for better design and performance. Electric cars did not need gear changes. The United States followed with the creation of electric tricycles. At the turn of the century, electric cars were selling better compared to their gasoline engine counterparts due to less vibration, noise and pollutants. In 1916, Woods invented the first hybrid consisting of an electric motor and combustion engine.