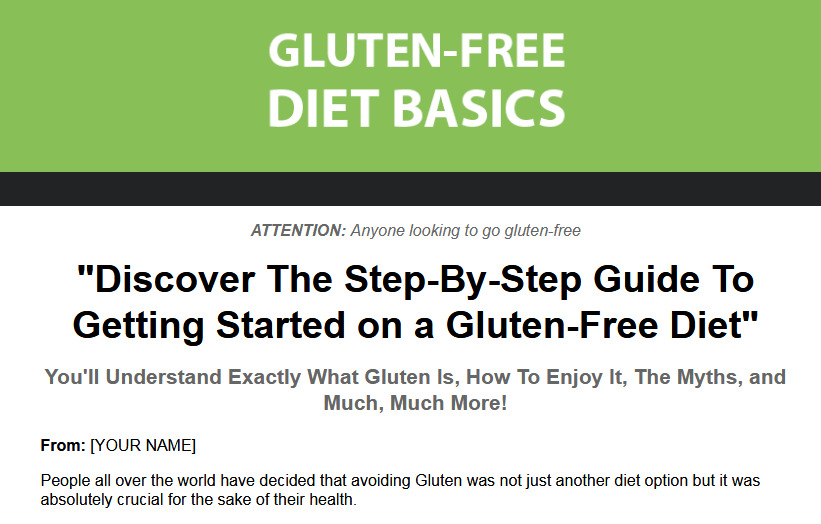 A recent survey highlighted that about a third of all Americans are actively trying to eliminate Gluten from their diet. This is an awful lot of people when we think about the fact that there are over 325,000,000 people in the US. But why are they making such a fuss? Let us take some time to examine a few of the reasons so many people have decided to live Gluten Free.

But what exactly is Celiac Disease you may ask? As highlighted in the previous chapter, Gluten is composed of two main proteins, Gliadin and Glutenin. Individuals with Celiac Disease react negatively to the Gliadin component. Celiac is classified as an autoimmune disease. That is because the immune system of these individuals will confuse Gluten with something dangerous like some sort of Bacteria. As a result, their bodies try to defend themselves against the Gluten and end up attacking itself in the process. This attack can result in the degeneration of the intestinal wall and can be life threatening if not treated.

Other symptoms of Celiac Disease include:

Others, who do not suffer from Celiac Disease, have chosen to avoid Gluten or cut it out of their diet altogether because they suffer from Gluten Sensitivity. These individuals may have even gotten a negative result when they did a blood test for Celiac but simply do not feel well when they consume foods that contain Gluten. They may even suffer from symptoms that are quite similar to those of someone with Celiac Disease. Suffering from Gluten Sensitivity means that the individual reacts negatively to Gluten even though their immune system is not attacking their bodies, as is the case with Celiac Disease. The symptoms of Gluten Sensitivity are usually not related to the gastrointestinal tract or cause any damage to the intestines at all. On the contrary, these individuals are more likely to experience fatigue, joint pain, abdominal pain or even ‘brain fog.’ Thankfully, Gluten sensitivity is not life threatening.

Gluten intolerance is also not life threatening. It will, however, cause quite a bit of discomfort. Individuals with this condition simply cannot process or digest foods that contain Gluten. This can be for a variety of reasons. That individual’s body may simply be unable to produce the enzyme needed to digest foods that contain Gluten. Symptoms of Gluten Intolerance are usually digestive related and may include gas, bloating, diarrhea or nausea. Just think about the result of consuming dairy when you’re Lactose Intolerant.

You should now be able to appreciate that living Gluten Free is a very serious matter for some individuals and it is not a decision to be taken lightly. You will be able to appreciate the seriousness of the matter especially if you suffer from these symptoms as well. Chapter 3 of this book will highlight how to determine if you have any of the serious Gluten related conditions that have been mentioned.

The major issue with diagnosing whether you have Celiac Disease, Gluten Sensitivity or Gluten Intolerance is that the symptoms look a lot like those you would have if you suffered from other diseases. And because Gluten is included in such a wide variety of foods, it is easy to confuse these ailments with your body simply reacting negatively to a particular type of food. That is why I would never encourage anyone to try and diagnose themselves. Celiac Disease can prove fatal if left untreated and if the appropriate steps are not taken to alleviate its effects.

Although Gluten Sensitivity and Intolerance are not life-threatening conditions, ignoring the symptoms can cause harm to your body in the long run. Leave the testing to the professionals. Think about how dangerous it would be if you ‘under diagnosed’ yourself as being Gluten Intolerant when you actually have Celiac Disease. Despite the fact that you will be leaving the final diagnosis to the professionals, it still wouldn’t hurt to learn more about the process.

A blood test is often used to confirm whether your symptoms are as a result of Celiac Disease. Remember that Celiac Disease results when your body confuses the protein in Gluten known as Gliadin as a dangerous substance and attacks it. Your Immune system is designed to produce a protein known as an antibody in order to fight off any organism your body suspects to be dangerous. This is also the case when you suffer from Celiac Disease. Your body will produce specific antibodies in order to defend itself against Gluten. Blood tests are thus performed to test if your body is producing the antibodies that are specific to fighting Gluten. Doctors often test for high levels of the antibody known as Immunoglobulin A (IgA) anti-tissue transglutaminase.

One of the easiest ways for doctors to determine if you suffer from Gluten Sensitivity or Gluten Intolerance is to ask you to eliminate Gluten from your diet for a period of about 30 days. If your symptoms disappear or become less significant during the time you avoid Gluten, and these symptoms reappear when you reintroduce Gluten to your diet, then it is obvious that your body is reacting negatively to gluten. A blood test can also be used to determine if you suffer from either one of these conditions.

Deficiencies of the Medical System

Gluten was not a very big deal ten years ago. Doctors are far more concerned about improving their technique for diagnosing Cancer and Sexually Transmitted Diseases. Far less time is devoted to researching negative responses to consuming Gluten. As a result, even well-meaning doctors simply confuse the symptoms of Celiac or Gluten intolerance with something else. Testing for Celiac is probably going to be one of the last things your Doctor will recommend. Additionally, there has been a notable amount of cases of Doctors under diagnosing their patients’ symptoms. Chapter 4 of this book will explain how you can help your Doctor to accurately diagnose your symptoms.

Yes can be sold
Yes can sell/resell rights/master resell rights to this product; Suggested Resell $7-$20
Yes you may edit the squeeze/sales page
Yes can be added to a paid membership site
Yes can give the eBook away for FREE
You do NOT have Private Label Rights. You may NOT sell or give away private label rights
You may NOT re-title or edit the contents of this product
You agree to handle any own customer issues related to this product