5 Productivity Hacks To Get More Done MRR Ebook With Audio 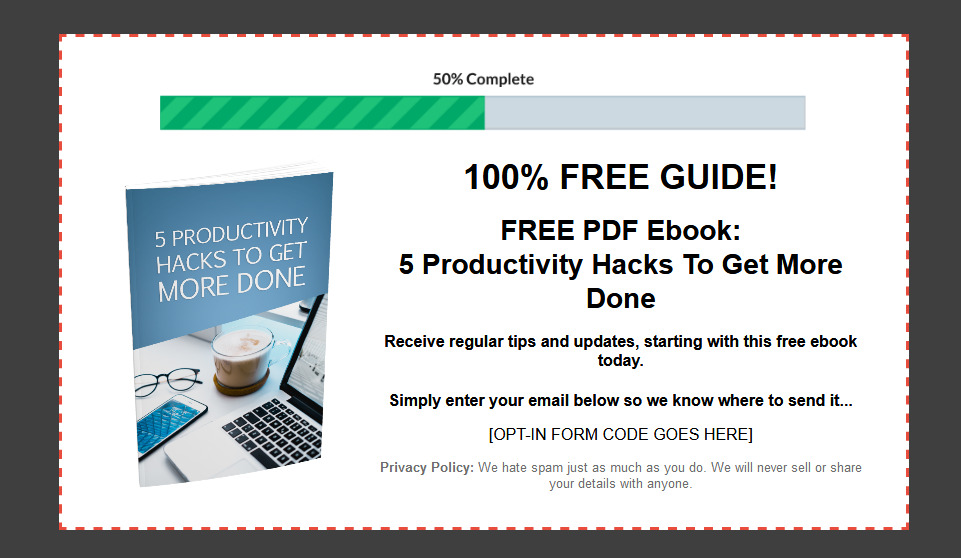 The famous British historian and author stated, in 1995, that work expands to fill the time available for its completion. In the realm of productivity, this has become known as Parkinson’s Law. Parkinson had worked in the British Civil Service and saw first-hand how bureaucracy works. Bureaucracy is itself a by-product of our culture, thanks to the limiting belief that spending more time working is somehow better than working smarter and faster.

When it comes to Parkinson’s Law, it means that if you give yourself a week to finish a two-hour task, then the task will increase in complexity and will become even more daunting in order to fill the week. The job may not even take a week to accomplish, but the extra time will be filled with more stress and tension about having to complete it. When you can assign the right amount of time to your tasks, you can gain back more time, and the task will ultimately reduce in complexity.

One way to utilize Parkinson’s Law to improve your productivity is known as running against the clock. To implement this idea into your workday, you need to make a list of the tasks that you need to complete. Divide the tasks up by the amount of time that it will take you to achieve them. Then give yourself half that time to complete each task. For this to work, you have to see accomplishing the task in the given time as crucial. You need to treat each of these time limits as any of your other deadlines. Part of reversing the thought that you have to work harder, not smarter, is to see the deadlines that you set for yourself as unbreakable, just like the deadlines that are set by your boss or clients.

When you first implement this technique, it will be partially an exercise in figuring out how accurate your projects are or the tasks on your list. Some of your time projections will be accurate, and you won’t be able to beat the clock when you cut the time allotment in half, so you’ll need to experiment with different times until you find something that works.

3) The Five-Minute Rule for Beating Procrastination

One of the biggest obstacles to our productivity is our innate ability to procrastinate. Most people tend to procrastinate at the beginning of a project out of fear or uncertainty, and sometimes it’s a combination of both. To overcome the unclear or daunting start of our work projects is to give yourself a five-minute rule for getting started. So how does the five-minute rule work?

As stated before, most procrastination is caused by either fear or uncertainty. Even if you are motivated to finish a task, fear of failure, criticism, or stress, ends up pitting us against ourselves. While we may want to complete the project, you also don’t want your fear to become a reality. This conflict makes it seem as though it would be unwise or impossible to move forward in accomplishing the task. This explains why we often tend to procrastinate even when it doesn’t make any sense.

The five-minute rule works to lower that inhibition and lulls us into the idea that we can quickly dip our toes in a project with no strings attached. This allows you to reconsider your engagement in a task after the initial five minutes of work. This, in turn, can increase your feeling of being in control and providing you the ability to make an autonomous decision, rather than feeling like you are being forced to do something that you don’t want to do.

This tactic will also lower what psychologists refer to as the cost of an activity. This includes the emotional cost, opportunity costs, and effort costs. Our motivation to engage in the action, after we’ve worked on it for five minutes, increases while our costs decrease.

The real intrigue of the rule though is why we continue to work after the allotted time has expired, once we’ve started to work. This is partly due to our expectations about how you’ll feel during an activity are imprecise. Once you’ve started on a task, you often end up with a more positive attitude about the task at hand. So, if you are suffering from procrastination, merely start a task and work on it for five minutes and see how quickly it creates a boost in your productivity.

The 80/20 rule states that 80 percent of your results, comes from just 20 percent of your efforts. This doesn’t mean that you should only go into work one day a week and give it a 20 percent shot and then leave, The 80/20 rule has nothing to do with time. Instead, it is suggesting that you need to focus your efforts and work harder in the areas that matter most while accepting that it is okay to let the smaller stuff slide from time to time.

You can apply the Pareto Principle to all aspects of your life and dramatically increase your productivity. When it comes to using this principle to your daily to-do list, you want to tackle two or three of your most significant projects, commitments, or tasks first. Rather than spending your time on the smaller, trivial tasks, you need to use your energy and time to complete the more significant items on your to-do list. Take the time to prioritize them and recognize that you are doing so because those tasks will more than likely give you 80 percent of what you want.